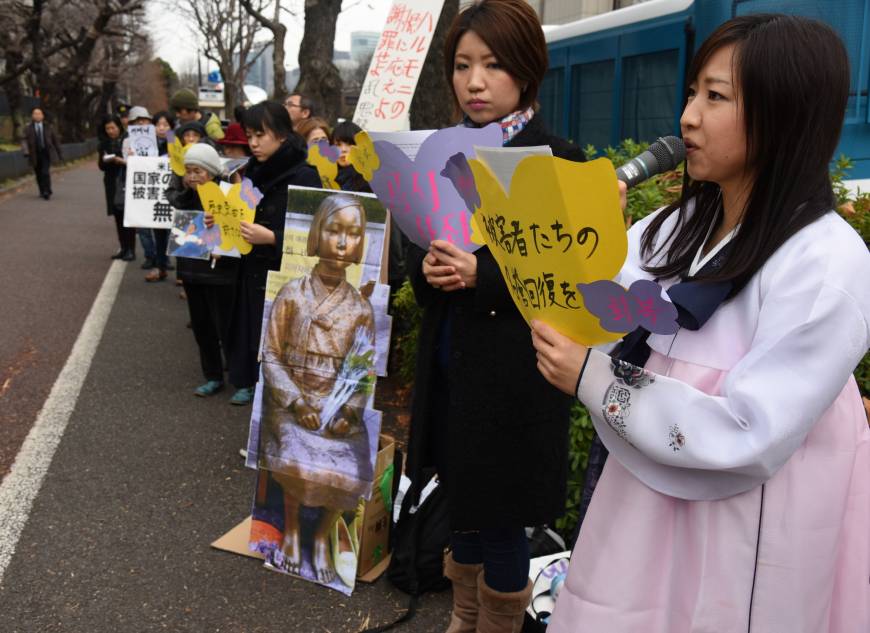 The opening of the 2018 Winter Olympic Games has brought the world’s attention to the Republic of Korea(ROK). While the cameras are focused upon athletic events, the attention of the locals is upon how the results of President Moon’s task force for the 2015 Comfort Women Agreement will affect diplomatic relations with the Republic of Japan(ROJ).

The ROJ has been making reparations and attempting to resolve the physical, psychological, and emotional damages made to Korean women during Japan’s imperial control in World War II. Japan issued a heartfelt apology in 1993 by Chief Cabinet Secretary Yohei Kono after reviewing a Japanese case study on “wartime Comfort Women”. On the 50th anniversary of WWII ending, Japan started the Asian Women’s Fund (AWF) to restore the honor and dignity of women that were effected throughout Asia. The fund provided 2 million yen per survivor from contributions by the Japenese people, and over 5 years disbursed 830 million yen for the welfare and medical care of survivors from the Japanese government’s funds. The AWF also started a digital museum so that the world would remember and not repeat their mistakes.

During the implementation and efforts of the Asian Women’s Fund in Korea, there was disagreement between the governments, civic groups, and survivors on how the reparations should be handled. Some groups felt the ROJ’s efforts were not enough, while other women found their efforts genuine. Due to irreconcilable differences, the AWF discontinued efforts in Korea in 2002.

Although the AWF was a start, civic groups did not feel the ROJ’s government had truly attempted to repair the damage done. In 2011, some civic groups began installing Comfort Women statues across the globe to bring international attention to the issue. One of these was even put up across the street from the Japanese Embassy in Seoul.

Finally in 2015 at the urging of the United States and other countries in the UN, the ROJ and ROK came to a diplomatic agreement. The ROK would establish their own fund for helping survivors, and the ROJ would contribute 8.3 million dollars to it. The ROJ would also issue an official apology acknowledging their part in the travesties. The ROK would not criticize ROJ anymore over this issue, and they would make efforts to remove the Comfort Women statues.

Although the 2015 agreement between the ROJ and ROK was signed as irreversible and final, the new president of the Republic of Korea and his task force found the agreement in 2015 was not acceptable. Two primary reasons were the agreement did not fully take into consideration the feelings and voices of the Comfort Women and their comfort women stories and it was a short-term diplomatic fix.

Despite the task force’s findings, the ROK’s Foreign Minister Kang Kyung-wha announced on January 9th that her country would not seek the renegotiation of the 2015 agreement. This decision by the Republic of Korea should ease the tensions that have been mounting in its relations with the Republic of Japan. At an earlier press conference, ROJ’s Foreign Minister Taro Kono urged the ROK to hold to their word and keep the “final and irreversible” agreement. What remains to be seen is how the actions of the last few months will affect the Republic of Korea’s relationships in the global arena and the sports arena.